I decided that the leftmost painting in the work formerly known as "Bromley Triptych: Behind East Street" didn't quite work in the context, and that - obviously - what was needed was another painting. Either to replace the leftmost painting, or to go in between that panel and the centre one.

So here is the new painting, tentatively entitled "Corner": 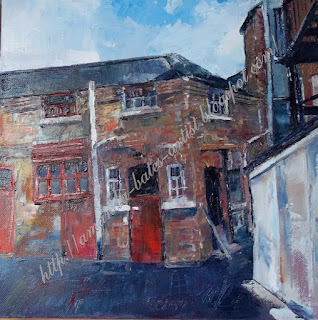 It's not the best photograph in the world, but it'll do for now.

The little sketch at the bottom is a rough plan of the alley, showing the approximate viewpoint for each painting. The paintings are numbered in the order in which they were painted.

Drawing the sketch map made me realise that my idea of a walk along the alley would actually dictate the following arrangement:

with the last of these ("The Back Stairs") representing a 180° turn to look back. Which probably makes it the optional one - in this configuration.