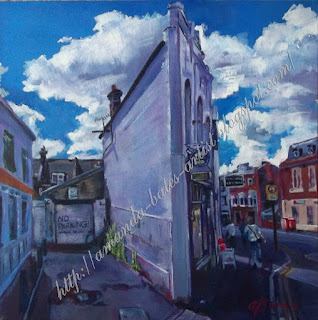 So it might not be the flatiron building, but there is something special about these urban wedge-shaped buildings, particularly where the passage of time and the loss of neighbouring buildings has revealed the shape and - inevitably - a bit of character.

This is the second painting I have made of this building; the first, Neal's Yard, was done in oils. This one - focusing on the pointy end of the wedge and the vacant lot beside the building - is in acrylics. The switch of media was partly to ring the changes, and partly because there was some writing to include (somehow, "No Parking" seems significant for the image), and it would have been jolly difficult to do with a knife in oils.

I suppose I could have used a brush with my oils, but that would have entailed solvents.

This painting was completed in two sessions. The results of the first session - with a 1" flat brush - are shown  below: 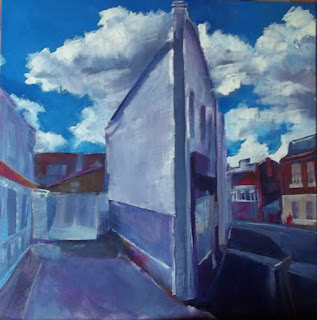 The colours used were an analogue of my oils landscape palette:
That's all. Just those five. I deliberately used a lot of magenta because I wanted a slightly unreal feel to the piece.